Whew! Am I actually blogging??? I didn’t know that still existed!

Things have been pretty interesting learning to adapt everything we do to our new little angel. As of today, Clark is three weeks old and we’ve managed to keep him alive thus far (see other September bumpies!) but things have been far from perfect. It’s seriously hard to have a newborn – not that I ever thought it would be easy.

First off, eating has been a touchy issue. My plan was to exclusively breastfeed, and while I had the normal bumps (learning to latch, engorgement), we overcame those pretty quickly. The bump in the road I didn’t expect was the hormonal changes that lactation would bring. I breastfed exclusively for the first two weeks, and I found that it was affecting my thought processes, especially at nighttime with the lack of sleep. I was starting to show mild signs of PPD, including resentfulness of Clark, and that scared me. Even after beginning to pump (which is super easy for me – I can get two ounces on each breast in about 4 minutes almost every time I pump), I was still feeling this way, so we started formula feeding about half of the time. Luckily, Clark and I got the best benefits in the first two weeks – antibodies for him, lots of weight loss for me, and a little bonding for both of us – but I just couldn’t handle the extra hormones. I was finally starting to bond fairly well, and I didn’t want the resentfulness to continue growing. So, our feeding type is weird – if I feel like breastfeeding, I do it. If I don’t or it’s not my turn to get up, he gets bottle fed, either with pumped milk (which I do sometimes when I get engorged or to keep my supply still kind of flowing) or with formula. It seems to be working pretty well now, and Clark hasn’t snubbed the breast or the bottle, which is good. As for eating times, sometimes it’s every three hours, and sometimes it’s every hour. It really depends on how he’s feeling.

Sleep has been equally frustrating. Jason is an amazing dad and was committed to helping equally from day one, so when Clark needed to be changed and fed in the middle of the night, usually Jason would get up and change him, and then bring him to me and I would feed him. This means that we would both get up every one to three hours. Yikes. Since we started supplementing with bottles, it’s been much better (albeit still not great since he’s still so little) since only one of us has to get up in the middle of the night each time now, and we trade off. This means that we each get to sleep a little longer, and that really helps. Now, how it’s going to feel when I go back to work in a week will be a different story. Sigh.

As for generally caring for Clark, it’s not too bad at all! Most of the time, he’s a very easy going baby and just wants to have his diaper changed, be fed, and sleep. This week, he’s started to be awake more, which means that it isn’t always easy to put him down for a few minutes to pick up the house or go to the bathroom, etc. I called my grandmother today just to be able to have someone here for a few hours to hold him and play with him so I could pick up my disgusting house lol. We then went out and bought him a swing. We didn’t think we’d need a swing because we thought he wouldn’t use it long enough, but this week has made us realize that it would be a good investment. Oh, and it will hold him until he’s 25 pounds, which is actually quite a long time. We ended up getting the Graco Silhouette on sale and with a coupon at BRU for only $102! So far, Clark really likes it. Most of the time, though, during the day I just love to spend time with him and smell him. There is nothing better than new baby smell.

In other news, things are going really well with my recovery. My *ahem* is almost healed, and hopefully the stitches will start dissolving soon. I’ve dropped 26 pounds, so I only have 6 more to go (although, hopefully if I work hard, I’ll drop at least 10 more after that). I have been able to start wearing some of my pre-pregnancy clothes, although the pants are snug (but they button! Yay!) and the shirts are way too small with the giant craziness that has ensued. Sorry for the TMI, but I miss my small, non-leaking breasts! I go back to the doctor a week from today to get released back to work and exercise, and then I’ll restart my gym membership so I can begin training for the Thanksgiving Day 10K.  I’m going to take advantage of this high metabolism from breastfeeding as much as I can since I probably won’t breastfeed much longer.

And because I want to, here are some pictures 🙂 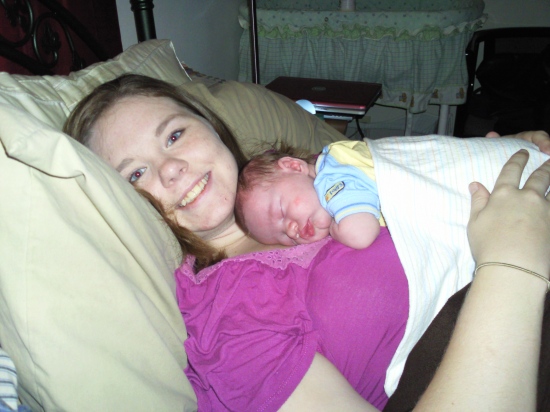 Napping after an appointment (and OMG crazy hair!!!).

See how perfect I am? I really am an angel!

The three boys taking a nap 🙂

At the mall with Mommy and Grandma – apparently the food court bores me. 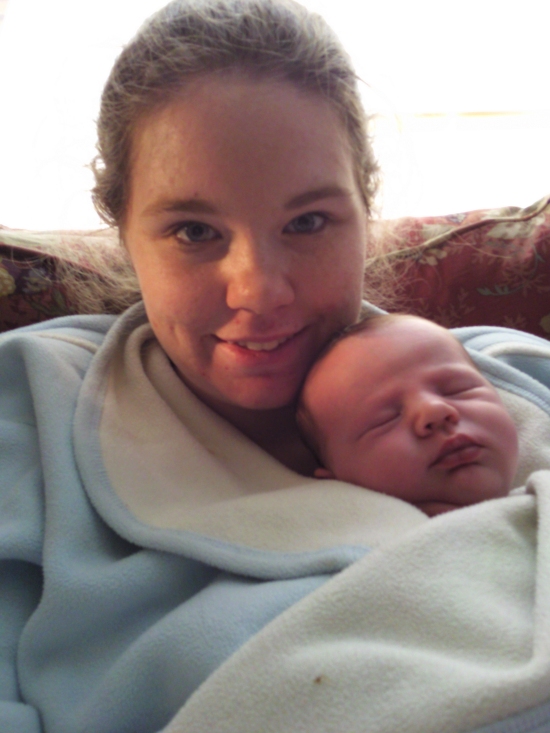 Mommy and I having some bonding time in the morning. I was cold so Mommy wrapped me in her robe.

Aunt Beth and Uncle Ryne holding me after we went out to Oktoberfest.

3 thoughts on “The First Few Weeks”